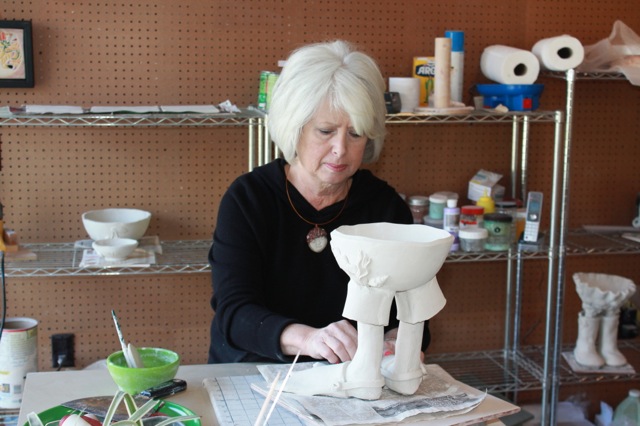 Ceramics
Ceramic is from the Greek word "keramos" meaning potter's clay; it refers to clay products made permanent by the application of heat. In addition to artistic endeavors, ceramics have many applications in industry where it is used for engine parts, electronics, medical equipment, and many other areas. When discussing art, this term is often used interchangeably with pottery. Ceramic artists, today, are sometimes referred to as "potters".

Clay
A naturally occurring inorganic substance composed of very small "plate-like" particles. These particles, when mixed with water as a lubricant, can slide past each other with relative ease. Known as "plasticity" or "workability", this gives clay its unique characteristic. Clay with finer particles is said to be more plastic than coarser clays but there is also more shrinkage during the drying and firing process. The various classifications of clay are determined by size, color, chemical make-up and purity.

Glaze
A glaze is a mixture of various materials and colorants, which are ground into a fine powder, mixed with water, and applied to ceramic pieces. This mixture, when exposed to high temperature during firing, will melt and vitrify, thereby forming a glass-like surface that is fused onto the ceramic piece. Glazes can be applied to dried unfired ceramics (greenware), or to ceramics that have been already been fired. Some complex pieces involve various cycles of glazing and firing to produce the artist's intended effect. Glazes are usually referred to by the temperature, or cone, at which they melt. For example a cone 10 glaze is a high-fire glaze. High-fire glazes tend to be more durable, but have less color, whereas low-fire glazes are more colorful but are less durable, and intermediate glazes provide a good compromise. When purchasing ceramic pieces, it is important to consider the type of glaze in terms of food safety, durability, and fit with the underlying clay body.

Firing
Firing is the general term for the process of exposing ceramic pieces to high heat in order to convert them into durable finished pieces. During firing, the clay and/or glaze go through a transformation whereby it is fused together into a solid piece. Unfired clay will dissolve in water, but the clay becomes impervious to water after firing. Although some fired pieces may still absorb water, this will have not an adverse effect on them. An experienced potter can achieve a wide variety of results by carefully controlling such firing factors as the rate at which pieces are heated and cooled, the presence of other materials in the kiln, and the amount of air (oxygen) that is present in the kiln. Often, pieces are fired several times at various temperatures levels in order to achieve the potter's desired results. Higher fired clays such as stoneware and porcelain tend to be less absorbent and more durable.

Bisque Firing
This term generally refers to the first (initial) firing if "shelf dried" clay. Also, pottery that has been fired but not yet glazed. The porous nature of earthenware means that it readily absorbs water, while other clays are almost non-porous even without glazing. The temperature of bisque firing is usually at least 1000°C, although higher temperatures are common. The firing of the earthenware that results in the biscuit article causes permanent chemical and physical changes to occur. These result in a much harder and more resilient article which can still be porous, and this can ease the application of glazes.

This term may also be seen as bisc, biscuit, bisqueware, bisquefired, biscuit. Bisque refers to both a preparation firing process and the pottery piece that has undergone the firing. The firing is to a temperature that brings about a physical and chemical change to clay. Atomically attached molecules of water are driven off the individual clay particles and they are fused together transforming them into one piece. This intermediate step in glazed ceramics gives bisque ware the ability to absorb water of the glaze solution causing the glaze materials to adhere to the piece while it maintains its shape. Considered to be in the "low-fire" range, some pieces are never fired above this and are therefore usually less durable. 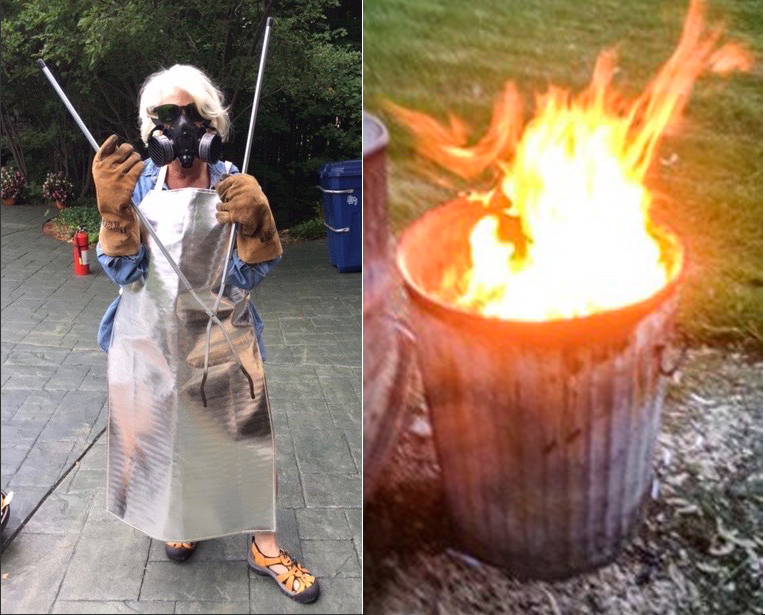 Raku Firing
Raku Fired pieces are heated in a kiln 1700 degrees. Wearing fireproof gear, I remove them and place in a metal container with combustible organic materials for reduction. The flames and then lack of oxygen create the colors and patterns that make each piece an original work of art.

I wait a few minutes until thing cool down, dig through the ashes, and smile as I clean off the ravages of fire and smile.

Raku firing is done in my driveway and use the dry leaves of mostly beech (found in the wooded area around my studio) in the reduction chamber.


Soda/Wood Firing
Soda firing is an atmospheric firing technique where "soda" (sodium carbonate) is introduced into the wood fired kiln near top temperature (2350°, Δ10). The soda combines with the silica, alumina, iron, and other elements in the surface of the wares to produce a glazed or flashed surface. The soda (sodium carbonate) vaporizes and is carried on the flame throughout the kiln. The soda vapors create a glaze when it lands on a piece. Wherever the flame goes so does the soda.

Wood and soda firings are done as part of a potters' consortium.